Blockchains protocols have some scalability limits and challenges that tradeoff between throughput and latency. The current blockchain technology is not fast enough and does not scale to include more transactions into the system so we have a performance challenge to be considered.

There is a united agreement between miners, consumers, and developers with several perspectives that we need to deploy scalability measures, and there has been an ongoing argument on how to improve Bitcoin’s scalability. Current proposals have focused on how big to make the blocks and how to handle the block size increases in the future.

Waves-NG will address the scalability bottleneck by making the network to reach the highest throughput depends on the network conditions. It will not only enhance the transaction throughput, it will also reduce transaction latencies. So it will be possible to get an initial transaction confirmation in seconds rather than in minutes. 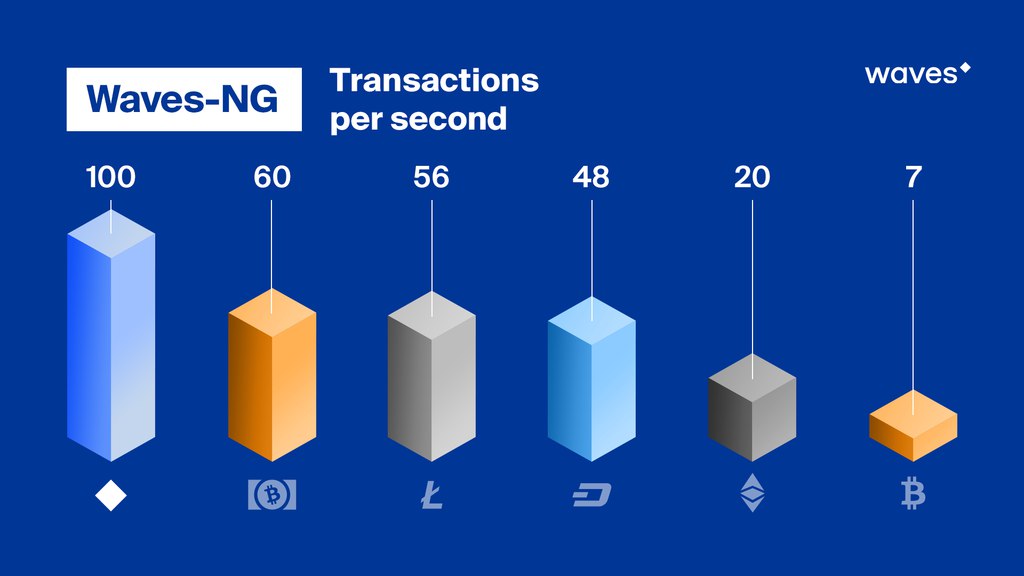 Blockchain Systems can process transactions and the maximum rate of these transactions is limited by the choice of two parameters: block size and block interval.

It is a next-generation blockchain protocol which is an alternative bitcoin scaling solution that does not involve increasing the size of blocks or decreasing the block time interval. This reduces the risk of forks amongst other advantages. Bitcoin-NG describes that the basic tradeoffs in Bitcoin can be reduced with an alternative blockchain protocol, offering a consensus delay and bandwidth limited only by the Network Plane. The protocol splits time into time periods(epoch). In each time period, a particular leader is responsible for serializing transactions (Figure 3).

The leaders take the rule of generating blocks: 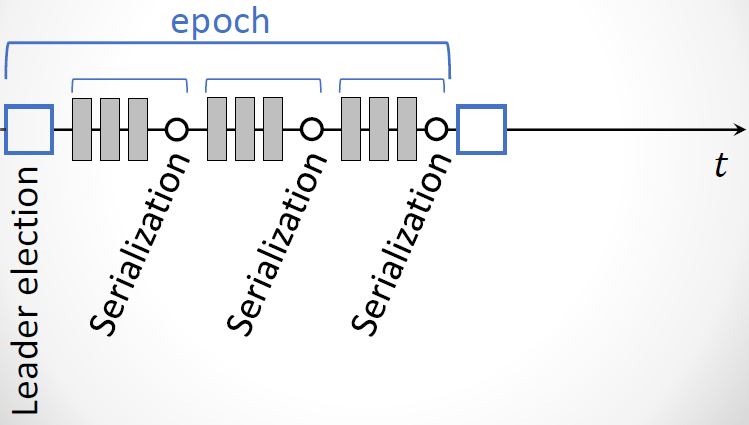 Waves-NG is based on bitcoin next generation protocol that serializes transactions and offers important improvements in the transaction latency(lower latency) and bandwidth(higher throughput) in comparison to Bitcoin without sacrificing other properties.

Waves approach this scalability matter by providing the miner with the ability to farm a block during the time of mining in continuous approach. This block continues increments called liquid block. This liquid block is unchangeable over time once the next block referencing is created and appended.

This approach increases effective bandwidth and speed of block creation, which is described as being “especially significant for businesses” using the Waves protocol since it allows for conducting micro-transactions - without any delays that are typical with traditional blockchain systems.

Furthermore, it allows the blockchain to withstand high loads, such as distribution of tokens following crowdsales and airdrops of bonus tokens. The speed of processing trading transactions on exchange is increased as well.

The main and core idea of Waves-NG is to split the Liquid block into two types, Key blocks and Micro blocks. The process of creating liquid block works as follows:

All of the transactions are part of the same block and are contributed all together. In between blocks, the traditional Bitcoin system appears idle to an onlooker, as miners are working to discover the next block, but without apparent progress on the consensus front.

In contradiction, in Waves-NG, the key-blocks can be small because they need to contain only the coinbase transaction, which defines the public key that the miner will be using to sign microblocks.
Because a key-block requires proof of stake, miners can not just produce one and expropriate the leadership at will.

Following the key-block, the lead miner can quickly issue microblocks, simply by signing them with the private key corresponding to the public key named in the key-block’s coinbase (Figure 4).

It's also called "Key Blocks", these blocks are generated with proof of stake but does not contain transactions.

They serve as a leader election mechanism and contain a public key that identifies the chosen leader.

Each block has a header that contains, among other fields, the unique reference of its predecessor which is a cryptographic hash of the predecessor header (either a key block or a microblock).

Once a node generates a key block it becomes the leader. As a leader, the node is allowed to generate microblocks at a set rate smaller than a predefined maximum.

These micro blocks will contain the ledger entries with no requirement for any Proof of Stake and they're generated by the elected leader in every block-generation cycle.

This block-generation cycle is initiated by a leader block.

The only requirement is to sign the micro blocks with the elected leader's private key.

The micro blocks can be generated at a very high speed by the elected leader(miner), thus resulting in increased performance and transaction speed.

For a microblock to be valid, all its entries must be valid according to the specification of the state machine, and the signature has to be valid. Figure 5 illustrates the structure.
Note that microblocks do not affect the weight of the chain, as they do not contain proof of stake.

When all micro blocks have been validated, they will be merged with their key block into one block.

Remuneration is comprised of two parts. First, each key block entitles its generator a set amount. Second, each ledger entry carries a fee.

This fee is split by the leader that places this entry in a microblock and the subsequent leader that generates the next key block.

In order to motivate participants to follow the protocol, Waves-NG uses the following mechanisms:

Each transaction pays a fee to the system, but unlike Bitcoin, this fee is distributed, with 40% to the leader, and 60% to the subsequent leader.

Finally, if a leader forks the chain by generating two microblocks with the same parent, it is punished by revoking the subsidy revenue; whoever detects the fraud wins a nominal fee, (Figure 5).

Figure 5: chain structure of the Waves-NG protocol. Microblocks (circles) are signed with the private key matching with the public key in the last key block (squares). The fee is distributed 40% to the leader and 60% to the next one.

In practice, the remuneration is implemented by having each key block contain a single coinbase transaction that mints new coins and deposits the funds to the current and previous leaders.

As in Bitcoin, this transaction can only be spent after a maturity period of 100 key blocks, to avoid non-mergeable transactions following a fork.

💡 Find more technical details about Waves-NG in this section.