dApp script is a Ride script that contains callable functions that can be called externally by the invoke script transaction.

You can use callable functions to: 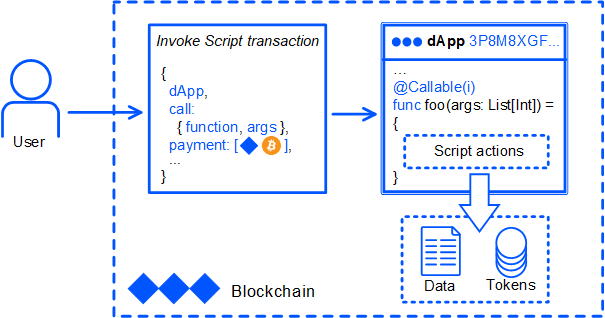 In addition, dApp script can comprise a verifier function that checks transactions and orders that are sent from dApp account. 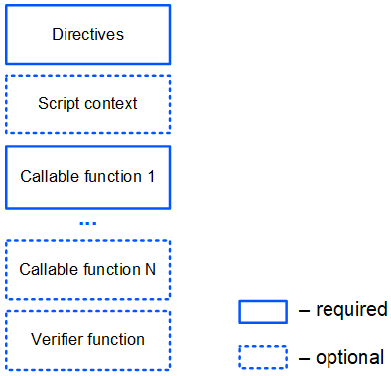 Each Ride script should start with directives. Here is the set of directives for the dApp script:

These directives tell the compiler that:

Callable function result is a set of script actions that are performed on the blockchain: adding entries to the account data storages, token transfers and others. The result format and the possible actions depend on the Standard library version used.

For a detailed description, see the Callable Function article.

Verifier function checks transactions and orders that are sent from dApp account (in other words it does the same as the account script). The verifier function should be marked with the @Verifier(tx) annotation, where tx is the transaction or the order that that the function is currently checking.

For a detailed description, see the Verifier Function article.

In the example below the verifier function allows transfer transactions and denies orders and other types of transactions. The match operator is used to specify verification rules depending on the type of transaction (or order).

dApp that has no verifier function performs default verification, that is, checking that the transaction or the order is indeed signed by this account.

To assign dApp script to an account, you have to send a Set Script transaction from this account.

There are the following options to send the transaction:

The fee for the Set Script transaction is 0.01 WAVES.

If the script contains a verifier function and the complexity of the function exceeds the sender complexity threshold, the minimum fee for each transaction sent from the dApp account is increased by 0.004 WAVES.

Limitations on the size, complexity of the script, as well as on functions and variables are given in the Limitations article.